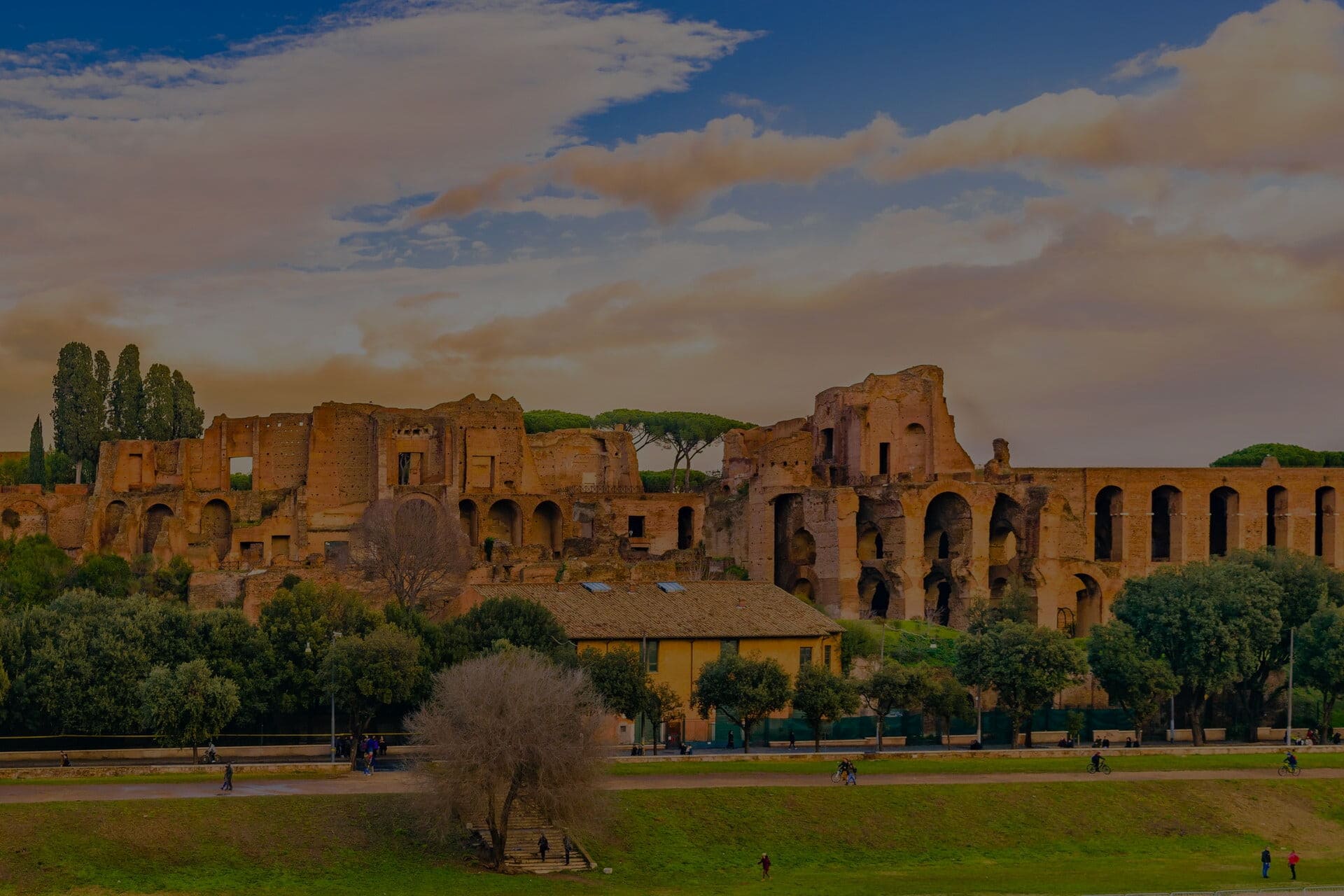 The World Heritage property encompasses the whole historic centre of Rome within the city walls at their widest extent in the 17th century, as well as the Basilica of St. Paul’s Outside the Walls. The property, complex and stratified, includes outstanding archaeological areas integrated in the urban fabric, which result in a highly distinguished ensemble. Founded on the banks of the Tiber river in 753 B.C., according to legend, by Romulus and Remus, Rome was first the centre of the Roman Republic, then of the Roman Empire, and in the fourth century, became the capital of the Christian world. Ancient Rome was followed, from the 4th century on, by Christian Rome. The Christian city was built on top of the ancient city, reusing spaces, buildings and materials. From the 15th century on, the Popes promoted a profound renewal of the city and its image, reflecting the spirit of the Renaissance classicism and, later, of the Baroque. From its foundation, Rome has continually been linked with the history of humanity. As the capital of an empire which dominated the Mediterranean world for many centuries, Rome became thereafter the spiritual capital of the Christian world.

Colosseum was not used just for Gladiator contests

Criterion (i) : The property includes a series of testimonies of incomparable artistic value produced over almost three millennia of history: monuments of antiquity (like the Colosseum, the Pantheon, the complex of the Roman and the Imperial Forums), fortifications built over the centuries (like the city walls and Castel Sant’Angelo), urban developments from the Renaissance and Baroque periods up to modern times (like Piazza Navona and the “Trident” marked out by Sixtus V (1585-1590) including Piazza del Popolo and Piazza di Spagna), civil and religious buildings, with sumptuous pictorial, mosaic and sculptural decorations (like the Capitoline Hill and the Farnese and Quirinale Palaces, the Ara Pacis, the Major Basilicas of Saint John Lateran, Saint Mary Major and Saint Paul’s Outside the Walls), all created by some of the most renowned artists of all time.

Criterion (ii): Over the centuries, the works of art found in Rome have had a decisive influence on the development of urban planning, architecture, technology and the arts throughout the world. The achievements of ancient Rome in the fields of architecture, painting and sculpture served as a universal model not only in antiquity, but also in the Renaissance, Baroque and Neoclassical periods. The classical buildings and the churches, palaces and squares of Rome have been an unquestioned point of reference, together with the paintings and sculptures that enrich them. In a particular way, it was in Rome that Baroque art was born and then spread throughout Europe and to other continents.

Criterion (iii): The value of the archaeological sites of Rome, the centre of the civilization named after the city itself, is universally recognized. Rome has maintained an extraordinary number of monumental remains of antiquity which have always been visible and are still in excellent state of preservation. They bear unique witness to the various periods of development and styles of art, architecture and urban design, characterizing more than a millennium of history.

Criterion (iv): The historic centre of Rome as a whole, as well as its buildings, testifies to the uninterrupted sequence of three millennia of history. The specific characteristics of the site are the stratification of architectural languages, the wide range of building typologies and original developments in urban planning which are harmoniously integrated in the city’s complex morphology.

Criterion (v): Worthy of mention are significant civil monuments such as the Forums, Baths, city walls and palaces; religious buildings, from the remarkable examples of the early Christian basilicas of Saint Mary Major, St John Lateran and St Paul’s Outside the Walls to the Baroque churches; the water systems (drainage, aqueducts, the Renaissance and Baroque fountains, and the 19th-century flood walls along the Tiber). This evidently complex diversity of styles merges to make a unique ensemble, which continues to evolve in time.

Criterion (vi): For more than two thousand years, Rome has been both a secular and religious capital. As the centre of the Roman Empire which extended its power throughout the then known world, the city was the heart of a widespread civilization that found its highest expression in law, language and literature, and remains the basis of Western culture. Rome has also been directly associated with the history of the Christian faith since its origins. The Eternal City was for centuries, and remains today, a symbol and one of the most venerable goals of pilgrimages, thanks to the Tombs of Apostles, the Saints and Martyrs, and to the presence of the Pope.

The World Heritage property Historic Centre of Rome, the Properties of the Holy See in that City Enjoying Extraterritorial Rights and San Paolo Fuori le Mura, contains all the essential elements needed to express its Outstanding Universal Value.

The property encompasses the whole historic centre of Rome, first inscribed on the World Heritage List in 1980 and extended in 1990 to the walls of Urban VIII, to the Holy See’s extraterritorial properties, and to the Basilica of Saint Paul’s Outside the Walls, thereby ensuring the complete representation of the values previously recognized. The property, marked by a complex stratification, includes some of the most important artistic achievements in the history of humanity, such as the archaeological areas, the Christian Basilicas, and the masterpieces of Renaissance and Baroque art.

The property is exposed to a number of threats, including development and environmental pressures, decay of historic buildings, natural disasters, visitor and tourism pressure, and changes in the social and economic framework of the city centre. There are also risks of vandalism and terrorism. All these are being addressed by the site managers.

The historic city, which has constantly changed throughout the centuries, today has a multifaceted and distinctive image. From the 19th century on, a careful and thorough policy has been implemented to protect its monumental and archaeological heritage, inspiring an intense activity of restoration, based on principles and laws born of scholarly discussions which were first tested here (restoration of the Colosseum, the Arch of Titus, etc.). Conservation work in Rome has gradually passed from individual monuments to the entire historic fabric of the city, leading to provisions for the protection of urban areas, which made it possible to maintain the integrity of an immense historic district. In Rome there is the Istituto Centrale del Restauro (now Istituto Superiore per la Conservazione e il Restauro), a prestigious international study centre which played a key role in drafting the Venice Restoration Charter and which helped to define conservation methodologies and tools. The city, centre of civilization from earliest times, today remains an extremely lively hub for meetings and exchange; it has a rich cultural, social and economic life, as well as being a leading destination for pilgrims and tourists. Rome, in all its activity, considers it a priority to preserve its outstanding cultural heritage and to ensure the effective protection of its authenticity.

The property is particularly complex, due not only to its size but also to its many functions (it is also the centre of the capital of Italy), institutions and to its status as a transnational property involving Italy and the Holy See.

With the legal establishment of Roma Capitale – the former Municipality of Rome – as a public institution with extended powers, Italy has started the process of simplifying governance, thus uniting in a single subject the institutional capacities for dealing with the promotion and presentation of the property.

The transnational property is protected by legislation of both the Holy See and the Italian Republic. On the part of the Holy See, the Law No. 355 for the Protection of the Cultural Heritage (25 July 2001) protects the site. Legal protection under Italian law includes, on the national level, Legislative Decree No. 42 (22 January 2004), and on the regional level, Law No. 24 (6 July 1998) and the Territorial Landscape Plan that outlines strategies for landscape heritage protection.

On the local level, the General Urban Plan of Rome regulates the entire territory of the city and represents an innovative and flexible tool for the protection, promotion and presentation of the World Heritage property. Specifically, it extends the classification of “historic city” to the whole World Heritage property and to the surrounding areas of the town. Here the regulations take into account the integrity of the urban fabric and the features of the building typologies, allowing different practices and quality controls. It selects, defines and regulates the areas of strategic planning (e.g. the Tiber, the Forums, the city walls), as well as those for potential development. It also outlines fundraising mechanisms for conservation, promotion and presentation of the site.

In addition, Roma Capitale has developed a strategic plan containing actions and major interventions aimed at protecting and promoting the values of the property.

Roma Capitale, the Ministry of Cultural Heritage and Activities, the Lazio Region and the Vicariate of Rome have signed an Agreement Protocol for the management of the site. This Protocol identified Roma Capitale as the agency of reference for the property and called for the establishment of a Technical-Scientific Commission, later expanded to include members appointed by the Holy See, for drafting the Management Plan.

In conjunction with the drafting of the Management Plan, the Commission has systematically reviewed the action plans of competent institutions, focusing on critical issues, opportunities and needs from a human and environmental standpoint, and promoting workshops and listening sessions with the participation of the main stakeholders.

Want to Learn more about the Colosseum & Rome? Book Your tour now & get the best price!